Tenth and Eleventh Sundays after Pentecost 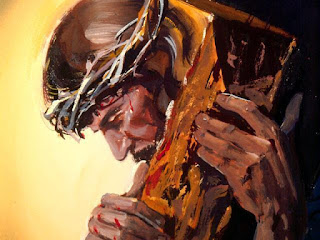 
You are not the hero of this story.  Old Adam figures if you can’t beat ‘em, join ‘em.  So he hears the parable of the treasure buried in the field and the pearl of great price, and he inserts himself into the story as the one who sells all that he has, gives up everything, to buy the field, to purchase the pearl.  Yes, that’s what the Kingdom of Heaven is like, says Old Adam.  I get to show how committed I am to Jesus, how much I love Him, by my great sacrifice, by my glorious work.  We like that interpretation.  It’s probably what you’ll find in most Bible commentaries.  It’s definitely what you’ll find in the latest Christian bestsellers.  And it is absolutely what you will find in your heart.  Repent.


Really?  You think you’re the one who purchased the Kingdom of Heaven by your great sacrifice?  Or, another way to ask the question is, you think you’re the one who redeemed Jesus?  Now you can hear how silly that sounds.  Let’s plunge Old Adam back under the baptismal water where he belongs, and God grant us ears to hear the parables with Jesus in the lead role.  The Kingdom of Heaven works this way.  There you are like a dumb box of rocks buried in a field.  It’s not just picture language.  That’s what happens when you die and we bury you.  Now you know your part in the story.  It’s to lay there dead.  Jesus seeks you and finds you and, miracle of miracles, He declares you, by grace, to be a great treasure.  (In our first Communion hymn we’re going to sing that Jesus is the Priceless Treasure.  That’s true, and I love that hymn, but it’s not an interpretation of our parable.  I picked it because the irony is so delicious.)  You are the treasure.  Not because you’re so great.  You’re a rotting, maggot infested corpse, a poor miserable sinner, spiritually blind, dead, and an enemy of God.  You have your father, Adam, to thank for that.  You’re the spitting image of him.  The apple doesn’t fall far from the tree.  But Jesus comes along and declares you to be a treasure, not because of your merit or worthiness, but because of the price He pays for you.  He sells everything… gives it all up, His glory, His majesty, His divine omnipotence… He gives it all up on the cross.  The price on your head, to make you His own, to bring you to life, raise you from the dead, is His holy, precious blood, and His innocent suffering and death.  And He pays it.  With joy, He says (Matt. 13:44).  That is the love of Jesus.  It fashions its own object.  Jesus raises you, His beloved, to life… spiritually now, by faith in Him, and on the Last Day, in your body when He comes into the field, the cemetery, takes you by the hand, and lifts you out of the casket.  Jesus is the hero of this story.  Jesus, crucified and risen for you.


The treasure in the field tells us about the universal atonement.  Jesus buys, redeems, not just the treasure, but the whole field.  The field is the world.  Jesus redeemed the whole world in His sin-atoning death.  The treasure is the Kingdom, which is to say, those who believe in Him, as He says elsewhere, “the kingdom of God is in the midst of you” (Luke 17:21; ESV).  The Kingdom is the Holy Christian Church.  That is the treasure.  So the first parable teaches us that in redeeming the whole world, Jesus buys for Himself a people, a Church, “chosen… to be a people for his treasured possession,” as our Old Testament reading has it (Deut. 7:6).  The pearl of great value teaches us that what He did for all, He did for you.  The merchant goes in search of fine pearls.  The Greek says “good margaritas,” which is the word for pearls, so I guess we’ll see you at La Casa Lopez after Church.  The merchant is discerning.  He looks through many pearls and He finds the one He wants and He sells everything to buy it for Himself.  Jesus finds you.  You singular.  You.  And He gives it all up on the cross, His very life, to redeem you and make you His own.


Now, why does He choose you?  You plural, the Church?  You singular, as in you yourself?  Moses gets this right.  “It was not because you were more in number than any other people that the LORD set his love on you and chose you, for you were the fewest of all peoples” (Deut. 7:7).  That’s what he says to Israel, God’s chosen people, and his words apply to the Church, and to you.  It’s not because He finds you so gosh darn cute and irresistible that God chooses you and makes you His own by the blood of His Son.  Moses says, it’s “because the LORD loves you and is keeping the oath that he swore to your fathers” (v. 8).  It’s because God promised, and He cannot lie or break His Word.  In His steadfast love and faithfulness, He sends His Son to buy you for Himself.  This is the very essence of God at work for you.  God is love.  God is faithfulness.  So He delivers.  He saves sinners.  He saves you.  God is the life-Giver.  So He raises you from the dead and gives you life in Himself.  Freely.  By grace.  Because He is good.


But just here we run into the great paradox.  Jesus buys the whole field, redeems the whole world, but not all are saved.  You are brought to eternal life with your Lord.  Some are lost and go to hell.  If it is all by grace and all the Lord’s doing, why are some saved and others not?  The paradox is between the universal atonement and eternal election.  If the sins of all people of all times are forgiven on account of Christ, why doesn’t everyone go to heaven?  To be sure, it is because some believe and others don’t, and those who don’t believe are the ones who are condemned.  But we just said your part in the whole thing is to lay there like a box of rocks until Jesus gives you living faith, as He does, by His Spirit, in His Word and Holy Baptism.  What about those He doesn’t enliven?  You can’t answer that question.  It’s not for you to know.  God knows, and that is enough.  We can only say what the Scriptures say.  God loves all people and wants them to be saved.  He redeemed all people by the blood and death of His Son.  If you come to faith, that is because God has given you faith in Christ as a gift.  If you do not come to faith, that is your fault.  We do not believe in double predestination, where God eternally predestines some to heaven and eternally predestines others to hell.  That is not what the Bible teaches.  The Bible teaches that you are saved because God has eternally predestined you to salvation.  You are His elect.  He chose you.  You did not choose Him, but He chose you.  But He does not predestine the others to hell.  You cannot solve this logical conundrum.  You are butting up against the hidden will of God.  Here you must simply put a finger to your lips and zip it.  Jesus says, “many are called, but few are chosen” (Matt. 22:14).  Just rejoice that the Holy Spirit has called you by the Gospel and enlightened you with His gifts, and that He sanctifies and keeps you in the one true faith of Jesus Christ, by grace.  Give thanks to God that it all depends on Him, His bringing you to faith and His keeping you in the faith.  “For those whom he foreknew he also predestined to be conformed to the image of his Son, in order that he might be the firstborn among many brothers.  And those whom he predestined he also called, and those whom he called he also justified, and those whom he justified he also glorified” (Rom. 8:29-30).  It is all His work.  And He who began a good work in you will bring it to completion on the Day of Jesus Christ (Phil. 1:6).


Jesus describes that Day for us in the parable of the net.  The Kingdom of Heaven is like a net cast into the sea that gathers fish of every kind.  Didn’t Jesus tell the apostles they would be fishers of men?  By the preaching of the Gospel, Jesus gathers men unto Himself.  On the Last Day, the net is hauled ashore, and the angels have the job of sorting through the fish.  The good fish are those who believe the Gospel.  They are kept for eternal life.  The bad fish are those who do not believe the Gospel.  They are cast into the fiery furnace, which is to say, hell, where there is weeping and gnashing of teeth.  From this we learn that there is a Judgment Day and there is a hell for those who do not believe.  In fact, it is for those who insist on paying their own way into the Kingdom, buying the field and the pearl for themselves.  That isn’t Christianity.  That is the religion of the unbelieving world and most Christian book stores.


But we also learn how wide and deep is the love of the Savior that He calls even you to be His own, and chooses you for Himself as His precious treasure and pearl.  How wide and deep is the love that does all this?  Jesus sells Himself into death to bring you into His Kingdom.  Every scribe who has been trained for the Kingdom of Heaven, every pastor is to bring out of the Scriptures what is new and what is old.  That is to say, he is to bring out the New and Old Testaments and show that they are, finally, not about you.  They are about Jesus for you.  You are not the hero.  Jesus is.  And the crucifix is the picture of Him paying the price for the field, paying the price for the pearl, paying the price for you.  Rejoice.  Your name is written in the Book of Life in the ink of Jesus’ blood.  And what can erase His blood?  What can separate you from the love of God in Christ Jesus?  Nothing.  Absolutely nothing.  You belong to Him.  In the Name of the Father, and of the Son (+), and of the Holy Spirit.  Amen.
Posted by Rev. Jonathon T. Krenz at 4:41 PM No comments: